“Lugo is a woman with complicated memories and sorrows… When she dances, she conveys depths of melancholy, devilishness or joy through the apt placement of her torso. The tilt of her ribs, for example, is just right to create that essential image of dignity, slight arrogance and emotional daring without which Flamenco is just another collection of steps and tunes. As a musician she’s equally sophisticated, inhabiting the music in the middle of every beat, with a command that is neither haughty nor proud, but self-assured, at ease. She dances the way some French cook—with what appears to be a graceful inevitability discovered on the spot.”
-Ann Murphy, Dance Critic for Dance View West Magazine


“It is when Lugo and her daughter Carolé Acuña dance together that the women unearth a new dimension in dance…”
-Ann Murphy, Oakland Tribune


“The Camellia Symphony Orchestra treated its audience to hassle-free, ticketless travel Saturday at Memorial Auditorium as it led a musical journey to California’s alter-ego, “España! Flamenco dancing by the seven-member Brisas de España from the Bay Area added a new and welcome dimension to a Camellia Symphony concert as the troupe’s fancy footwork helped illustrate and punctuate de Falla’s ballet. The troupe performed spiritedly to the composer’s quintessentially complex Spanish melodies and rhythms. The orchestra members provided the piece’s powerful musical underpinnings, and the dancers gave it style and grace. In all, the two groups appeared to captivate the large audience with their bravura and skill. Brisas’ artistic director, Carolina Lugo, choreographed a small but intense operetta. Following de Falla’s lead, it was full of steamy and fiery emotion as well as naive and flirtatious interplay. The choreography incorporated classic flamenco steps as well as more balletic elegance. The dancers clicked and swirled their way across Memorial Auditorium’s sprung wood floor, using its resonance to good effect as the orchestra kept up the blazing pace.”
-Patricia Beach Smith – Sacramento Bee Arts Critic


“…the Spanish idiom had orchestral color galore made even more vivid with the suave and energetic dancing of Carolina Lugo a masterstroke of programming and show business…Elegant, fiery and skilled, they are a formidable troupe and make the De Falla all it ought to be – exciting in every way.”
-Jack Neal’s Music Review, Reno Magazine


“The Flamenco legacy of Lola Montes lives on in the pure dance poetry of Carolina Lugo. The dazzling colors and passionate energy of this troupe will leave you breathless.”
-Diablo Magazine 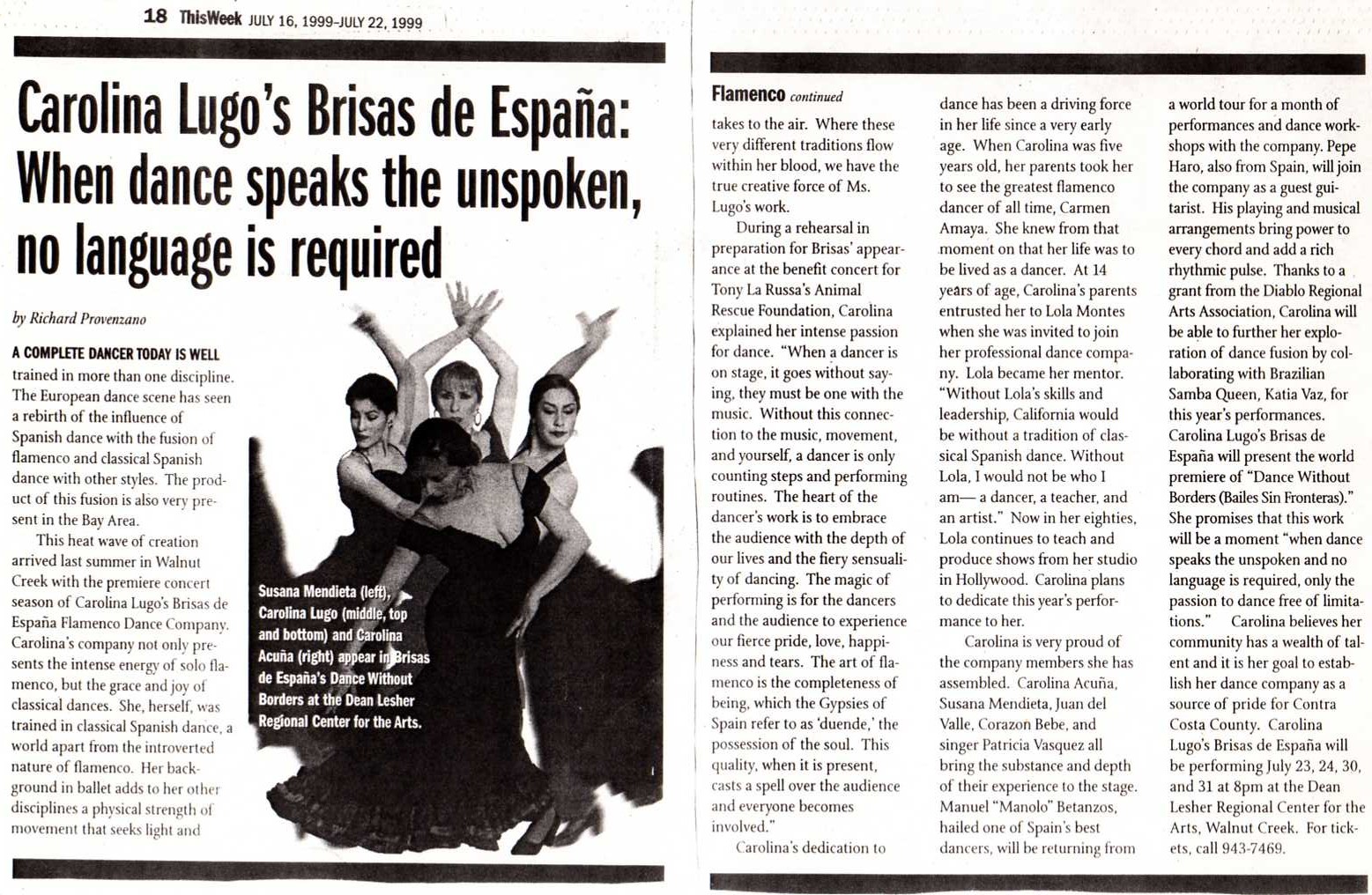